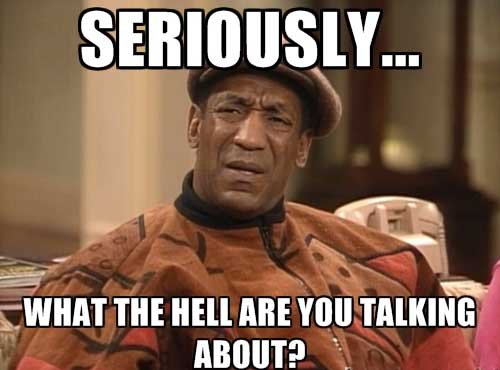 A- It is justifiable that there are no things that cannot be proved. But most people think of it like this: "We can interpret the unprovable things in any way we want."

A- For example, is the fish in that aquarium still there when I am not looking?

A- This is your comment. Can you prove it to me?

B- Hmmm. Maybe... I take a picture of him when you're not looking. You see the photo taken, but you don't see the fish. Then we develop the movie together and you see it.

A- Hmm. It can happen. Maybe you may have proved that the fish was there when I didn't look, but that doesn't prove that it's there in all the moments I haven't looked.

B- I shoot the fish on video.

A- In the video film, there is a gap between the scenes, that is, between the two screen scans, what if the fish is not present at that moment.

B- But now you are diverting the subject. There is a gap between the moments when you look at the fish if you look at it. Because the detection speed of his eye is 20-25 frames per second.

A- Right. But this was just one example. Besides, I completely I did not want to install it on the fish sample. I'm talking about things that are provable and unprovable. For example, it has now emerged that the fact that we constantly look at the fish does not mean that it is always present.

B- What does it mean? Do you think the fish is in a twentieth Could it be going elsewhere?

A- If we consider his natural abilities, no.

B- Well, what other possibility is there?

A- Hmm. Perhaps we can take the example of the television image. Where does the image go back and forth between two images on the television at one-twentieth of a second?

B- Of course nowhere. Each image is created by scanning it individually.

A- Maybe our fish is too.

A- It was created separately.

B- Hey, this doesn't happen. The two frames of the image on the TV are two different frames. Here we are talking about one and the same fish.

A- How can we know that there is one and the same fish. If the fish at one moment of time were the same as the fish of the next, we could say that time does not pass, at least not for fish.

B- Maybe time is not passing.

C- Hey, I've been listening to you ever since you said, but what you say is pretty ridiculous. Especially yours. But when you started to bullshit, I decided to do something to save objective reality.

B- Look, my friend, I did not start to be silly, and nobody invited you to speak.

A- I think if there are things he wants to talk about, he should talk. Besides, maybe our discussion will end more quickly.

B- Well then. But let me point out that I just said that maybe time is not passing.

A- Maybe you said it just for words but you gave me an inspiration, can you prove me that time has passed?

B- Whoops! Are you serious now?

C- Yeah, look my friend. Time passes because we were just talking. This job is that simple. We were talking yesterday and we are still talking. So once in a while, time has passed.

A- I did not see it while passing.

C- What do you mean I did not see it in passing.

A- I mean, I will not help you to get up and refute myself now. If you can, you have to do it yourself.

B- Do you not remember talking yesterday?

A- Let's say I remember. What does this prove?

C- Of course it is confused that talking!

A- Well, I also remember my dream tonight, but it did not happen. Besides, there are so many things that I have forgotten again that I should never trust, let alone be certain and 100% trust in my memory.

B- Well, remembering him shows that you are.

A- What if I remember wrong.

B- Even then, something happened, but you remember wrong.

A- Well, is it not wrong to remember that it happened?

C- If there is a recall, there is something that did not happen now and happened in the past. This proves that time has passed.

A- Well, but I may have dreamed of something that I presume happened in the past right now.

B- What a suspect?

A- Of course, time has passed. The passing of time can be defined by the change between two moments. Not a single moment, right now, proves this.

C- So how do you dream of something that you have never known or tasted?

A- Actually, what I think of as a dream does not imitate what I think is real. Now I can draw a line here and this could be a line shape that I never knew how to draw before. Whether the imagination imitates the reality or is dependent on it, this always stems from the idea that there is reality but there is no dream. Who can prove to me that you have truth and that dream disappears? Maybe she's mimicking the real dream and addicted to it !?

C- You have drawn lines hundreds of times before. You know this concept. Even if you move your hand randomly, it will reveal a line you have never drawn before. Also, if you wanted to draw the same line as you drew, I don't think you could do it. Because it wouldn't be exactly the same.

C- You cannot establish it because you will not have a starting point and a fulcrum. Even dreams have to depend on something.

A- Can you prove that you have to endure?

B- Why do we always have to prove something? You are not trying to prove anything, you are trying to refute everything. Difficult to prove, easy to refute.

A- Why is it difficult to prove, it is easy to refute. Prove it irrefutably, if you can prove it. It's easy to prove that two is two, it's hard to refute. Besides, I am focusing on the unprovable. You are the ones who argue that what I am saying is provable.

B- It is just an assumption that two are two. How can it be refuted once you start with this acceptance, you are already starting by accepting it. And we created two conceptually. What could be other than two?

A- It could be three.

C- You are inconsistent for the sake of objecting. How long can you keep this nonsense ... You do not believe in what you go against. Otherwise, you wouldn't be able to sustain a meaningful existence among us, or establish harmonious or semi-harmonious (!) Relationships with the people around you.

A- You think you got the upper hand, right? If you had five other people who talked like you, I bet you'd be more confident. What if there were a hundred people or a hundred thousand? Then it wasn't even worth considering the possibility that I might be right. My aim is not to justify, it doesn't matter whether anyone was with me or not. My strength does not come from myself. I'm looking for the truth. It is his light that illuminates my path. The fake needs support and support, constantly needs self-affirmation. The truth will eventually prevail, even if alone. Do you understand now the harmonious or semi-harmonious relationships between a truth seeker and a group or group of people who are not seeking the truth around him? Even if these relationships fall out of sync, you think who or who should keep up with whom or whom. It seems it has always been like this; the majority is strong and right. However, their strength may also be the power of a counterfeit. But this power can disappear just as it disappears when the light falls on the darkness as if it never existed.

C- You are making a long speech for the sake of the truth. But you haven't accepted the truth of the truth for an hour. Should we say that? You are not aware of what you are talking about. What he says does not make progress in total.